Written in 1781, "Winter: A Dirge", is one of Robert Burns' earliest compositions. Burns wrote the following notes about the poem:

"As I am what the men of the world, if they knew such a man, would call a whimsical mortal, I have various forms of pleasure and enjoyment which are in a manner peculiar to myself, or some here and there such out-of-the-way person. Such is the peculiar pleasure I take in the season of Winter more than the rest of the year. This, I believe, may be partly owing to my misfortunes giving my mind a melancholy cast; ... "

"A Red, Red Rose" is one of the greatest love poems. It is based on a folk version of a song that Robert Burns heard during his travels. It was first published in 1794, in The Scots Musical Museum.

Robert Burns' most famous poem, Auld Lang Syne, was written in 1781. The poem is based on a tradition folk song. Burns wrote:

"The following song, an old song, of the olden times, and which has never been in print, nor even in manuscript until I took it down from an old man"

The phrase "Auld Lang Syne" can be variously translated as "old long since", "long long ago", "days gone by" or "old times".

Very soon after the poem's publication, it became popular to sing the poem on New Year's Eve, or as it is called in Scotland, Hogmanay. This tradition gradually spread through much of the world.

The Life And Times Of Robert Burns 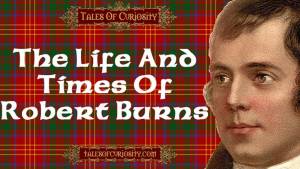 This video recounts the life of Robert Burns, the Scottish poet and author of Auld Lang Syne. We meet some of his great loves and find how his life is celebrated today.
Wikipedia - Robert Burns
librivox - Winter: A Dirge
librivox - Auld Lang Syne
librivox - Eighteenth Century Poetry And Prose Collection
Privacy PolicySitemapAbout Tales Of Curiosity